Adds the ability to fill bottles from any source. Point at a water source, the interaction prompt will show if your first pressing of “Activate” will fill some bottles. Once it’s done, the prompt will change to vanilla action. If you don’t have any empty bottles, upgradeable liquids, or caps to seal them, you will see the vanilla prompt as usual. 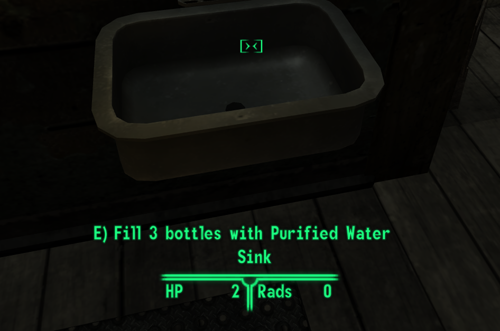 The mod supports any bottle, added to the NVDLC03AllEmptyBottlesLIST formlist. Filling a bottle requires a bottle cap: don’t expect to get it back, consider it deformed after sealing a non-Nuka bottle.

Consumed drinks return empty bottles. Vodka, Beer and Wine now also have their own bottles. Drinks can be drained from the inventory menu via middle click (sorry, controller users).

Water and Brahmin Milk return random bottles because that’s what wastelanders, including you, use to carry them around.

The mod automatically upgrades drinks to better ones. Purified Water and Brahmin Milk are considered equal and don’t trump each other.

Brahmins can be milked by simply activating them. Keep in mind, that you are not the only person in the wasteland, who likes free milk, and many brahmins you encounter may have been milked recently (depends on your luck). Just come back later. Note that only milk brahmins can be milked. The rule of thumb is: if you can tip it, you can milk it.

Vault 13 Canteen is replaced with a replenishable quest item, working similarly to the GRX implant.

Enables hardcore mode - player receives water one level lower than in the source. You need to get the main file first.